The theory of ‘trickle-down’ economics is pretty familiar. When politicians want to lower taxes for the rich, they often argue that doing so will increase the prosperity of the poor. The idea is that if the rich have more money they’ll stimulate the economy by spending it – on luxury goods, holidays, home improvements, meals out – or by investing it.

Why would they do that? That’s a hard psychological question, and people who give their money away may have lots of different motives when they do so. One reason, though, is that it makes you look and feel good. People around you think you’re a great guy/girl, and you get a warm glow from knowing you helped someone in need.

Another is that it lets you, or your brand or company, be associated with activities or individuals that are admirable or valuable. When Santander bank give money to a bunch of independent filmmakers, Santander get to be associated with the creativity and authenticity of those they hand their money to. That this association is valued and valuable is reflected in the fact that exchange of money usually comes with conditions that the name of giver and receiver be forever linked by publicity, press release, and photo-op.

The Wunderbar Foundation is a way to think about the kind of exchange that is taking place here. When money ‘trickles-down’ through philanthropy, something else ‘trickles-up’. Here’s an idea: philanthropy is a mechanism by which the virtue, authenticity, and camaraderie of artists and community groups can ‘trickle up’ to those who are at the top of the economic ladder but at the bottom when it comes to these kinds of fulfillment.

We’ve been thinking about the business planners dream chart: Maslow’s hierarchy of needs: 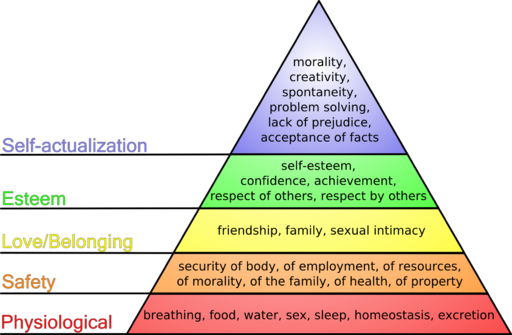 Self-actualisation is the hardest thing of all to achieve, yet it’s what artists and the artist life represent. Somehow artists have gone straight to the top of the pyramid of needs. Those with all their physiological and safety needs met through material wealth might look upwards at those financially below them, and wonder whether some exchange is possible.

It isn’t that all artists are ‘self-actualized’, happy and virtuous and all rich unhappy and corrupt; but philanthropy and charity are one mechanism by which wealth trickles down, and may also be a mechanism by which those qualities associated with art and artists — and at the pinnacle of Maslow’s pyramid —along with other benefits like status and ‘good feels’ trickle up.

If this seems like a joke, it’s worth noting that the idea of ‘trickle-down’ economics began its life as a joke too. In 1931, the American humourist, Will Rogers remarked that the only way President Hoover’s plans to get the U.S. out of the economic depression could benefit America’s needy, was if wealth appropriated for the top could ‘trickle down’. How this could happen, he said, was ‘beyond the understanding of us Dumb Birds’. It was only in the era of Reaganomics that the idea that if the rich were richer money would ‘trickle-down’ to the poor became a pillar of economic theory.

What would happen if we took seriously the idea that those on the receiving end of philanthropy aren’t ‘wealth creators’ but ‘happiness creators’; and as such they must be protected from those forces that would strip them of this crucial asset, and prevent it from ‘trickling-up’ to those who need it most?

Corruption in the trickle-up economy

One thing that makes artists, community groups, thinkers, and activists important in society and attractive to philanthropists, is their perceived integrity and authenticity. They are, in some way, outside of the corporate world which commodifies, costs, calculates and competes. The businessman’s activities have instrumental value–their value is determined by the extent to which they generate wealth; what artists produce has intrinsic value–it is  valuable not for what they can do but simply in virtue of what they are.

If the trickle-up economy is to function, these qualities need to be protected. But what if the very act of seeking funding–filling out those applications, writing bids with outputs, objectives, quantitative measures of success, and feedback mechanisms–erodes those qualities? What if self-actualization is inconsistent with binding yourself to a funder’s conditions? What if describing what one does–as an artist or community or thinker–using the language of the corporate world is itself corrupting? Can I reframe my community group’s work in terms of social enterprise, entrepreneurialism, and customer satisfaction without devaluing that work?

We’re interested in the special kind of faking it, pretence, hypocrisy, and cynicism that seems necessary when one has to reframe that which is intrinsically valuable to make it seem instrumentally so. What does it do to those of us who fake it, and to the projects thus re-imagined, when we pretend that what we know to be valuable in itself is valuable only as a means to an end?